It’s taken more than 15 years but finally a judge has ruled that fox hunters have been riding roughshod over the law – and enough is enough, says the League Against Cruel Sports.

The national wildlife charity says today’s conviction of Mark Hankinson, director of the Masters of Foxhounds Association, shows the hunts have been mocking the police, the Crown Prosecution Service and up to the very top of the British judiciary for the past 16 years.

He was today found guilty of intentionally encouraging or assisting others to commit an offence under the Hunting Act by telling them how to use the excuse of so called ‘trail’ hunting to get away with hunting real animals.

Judge Tan Ikram, deputy chief magistrate of England and Wales, read out key parts of the webinar transcripts in his remarks, before saying:  “In my judgement he was clearly encouraging the mirage of trail laying to act as a cover for old fashioned hunting.

“Perhaps most incriminating was the advice that trail laying had to be as ‘plausible’ as possible. There would be no need to suggest that [a trail layer] was needed unless it was a sham or a smokescreen.”

The charity, which was instrumental in the Hunting Act 2004 passing the statute books, is now demanding the Act be amended to remove the loopholes that have allowed hunts to keep chasing and killing wildlife such as foxes, stag and hare with dogs.

The League was the complainant in the case against Hankinson, which was investigated by Devon and Cornwall Police.

Andy Knott, MBE, who is the League’s chief executive, said: “This is the right result today, in what should prove to be the final knell for hunting wild mammals with dogs.

"The judge's comments were telling: more than half the hunts on that webinar were being taught how to break the law, by a man who himself tried to use 'clever language' to get away with it.”

“Enough is enough. The courts have heard definitive proof of the hunting lobby explaining to hunts how to get around the law and make it almost impossible to prosecute them.

Mr Knott has personally written to the Prime Minister to urge for a swift review of the law, and has also sent letters to Defra and the Ministry of Defence, among others, to demand they stop issuing licences to hunts that allow access to public land.

He is also keen to hear from the National Trust, which is due to hold a vote on the future of trail hunting on its land on October 30 at its annual meeting in Harrogate. 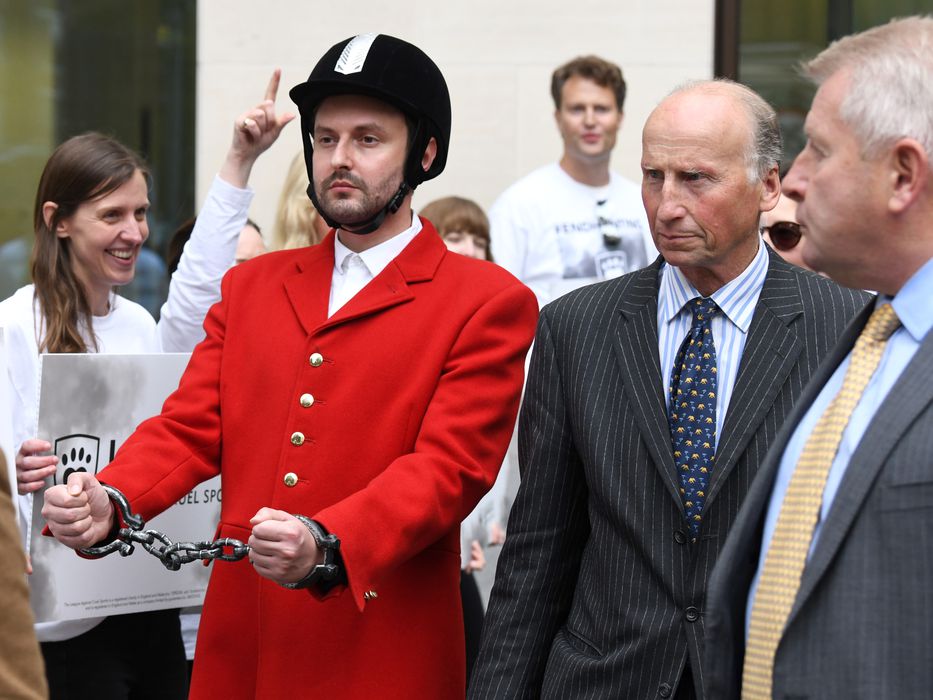 Hankinson was one of the speakers from the Hunting Office, Masters of Foxhounds Association and the Countryside Alliance who gave “advice” on a series of training webinars on how to create a “smokescreen” around hunting – to try and convince those watching that an artificial trail had been laid when in fact the hunts hounds would be free to chase and kill foxes.

Another of the speakers on the webinar, Phil Davies, is the CA’s police liaison officer and a former chief inspector with Dyfed Powys Police in Carmarthen. He was shown on camera talking about creating an “element of doubt”, presumably in any ensuing court case, that the hounds had been following a trail when in actual fact the opposite was true.

Lord Benjamin Mancroft, the former chairman of the MFHA and member of the House of Lords, chaired the webinars and talked about the need for the information within them to be kept within the confines of the hunting community.

“Perhaps most incriminating was the advice that trail laying had to be as ‘plausible’ as possible. There would be no need to suggest that [a trail layer] was needed unless it was a sham or a smokescreen.”"

Neither Davies nor Mancroft were in court.

Mr Knott added: “That a British peer can chair a meeting in which the members were shown how to break the law shows how these people believe that laws don’t apply to them. No longer can they get away with it. As I said before, enough is enough.”