What is fox hunting?

Fox hunting is a traditional ‘sport’ in which hunters, usually on horseback, follow a pack of hunting dogs aiming to pick up the scent of a fox, chase it and kill it. Fox hunting is illegal in England, Scotland and Wales, but evidence suggests that hunts are regularly breaking the law.

Fox hunting is illegal in England, Scotland and Wales. It is still legal in Northern Ireland.

Fox hunting was banned by the Hunting Act 2004 in England and Wales, and the Protection of Wild Mammals (Scotland) Act 2002 in Scotland. But while these were both welcome and hard-fought pieces of legislation, overwhelming evidence suggests both are either being ignored or exploited by hunts on a regular basis.

Hunts in England and Wales invented the activity of trail hunting after the fox hunting ban came in. This claims to be a non-lethal sport where the hunt simply follows a pre-laid trail rather than searching for and chasing a fox. However, years of evidence shows that hunts are using trail hunting as a cover for illegal fox hunting.

An explosive exposé showed senior figures within the Masters of Fox Hounds Association and the Countryside Alliance caught on camera admitting that ‘trail’ hunting is a “smokescreen” for the chasing and killing of foxes.

“Now you know more about hunting than the saboteurs or courts will know but what it will do is create that smokescreen or that element of doubt that we haven’t deliberately hunted a fox, so if nothing else you need to record that and it will help us provide a defence to huntsman.”"

The League Against Cruel Sports and other organisations has been campaigning to expose trail hunting for years. This powerful new evidence is a game changer and will play a vital part in ending trail hunting once and for all.

Hunts in England and Wales also exploit exemptions to the Hunting Act. These were designed to allow certain types of pest control or scientific research but are used by the hunts to give them an excuse to carry on hunting foxes.

In Scotland, an exemption in the law allows foxes to be killed by flushing to guns, where a pack of hounds is allowed to chase a fox from cover, after which it can be shot. However, the League has historic evidence showing hunts claiming to be flushing to guns – but without having any guns present in the right place.

“It’s a lot easier to create a smokescreen if you’ve got more than one trail layer operating, and that is what it’s all about, trying to portray to the people watching that you’re going about your legitimate business.”"

However, hunting is not a town vs country issue, and it is not a class issue. More than seven out of 10 Conservative voters want hunting to remain illegal. Hunting is an issue of animal cruelty, nothing else.

Some argue that hunting should continue because it’s a British tradition. However, bear baiting and bull baiting were also traditions, now rightfully consigned to the history books.

Fox hunting is not a credible form of pest control. Hunters claim that they are helping farmers by killing foxes, but this is a senseless argument as farmers retain the right to control pests on their land.

Any suggestion that fox hunting is about pest control can be dismissed very quickly by the fact that hunts have been caught capturing and raising foxes purely so they can then be hunted. In May 2015, a League investigation revealed 16 terrified fox cubs held captive in a barn linked to a fox hunt in Yorkshire. We rescued them, took them to a vet, and sadly one died, but we released the others to safety. We are proud to have protected those foxes.

While the scale of this fox factory was shocking, it’s not an isolated case. In December 2015, League investigators released a fox found locked in a building near to where the Belvoir Hunt was meeting. It is worth mentioning that a few months later, while monitoring the same hunt, our investigators were brutally attacked, leaving one with a broken neck. 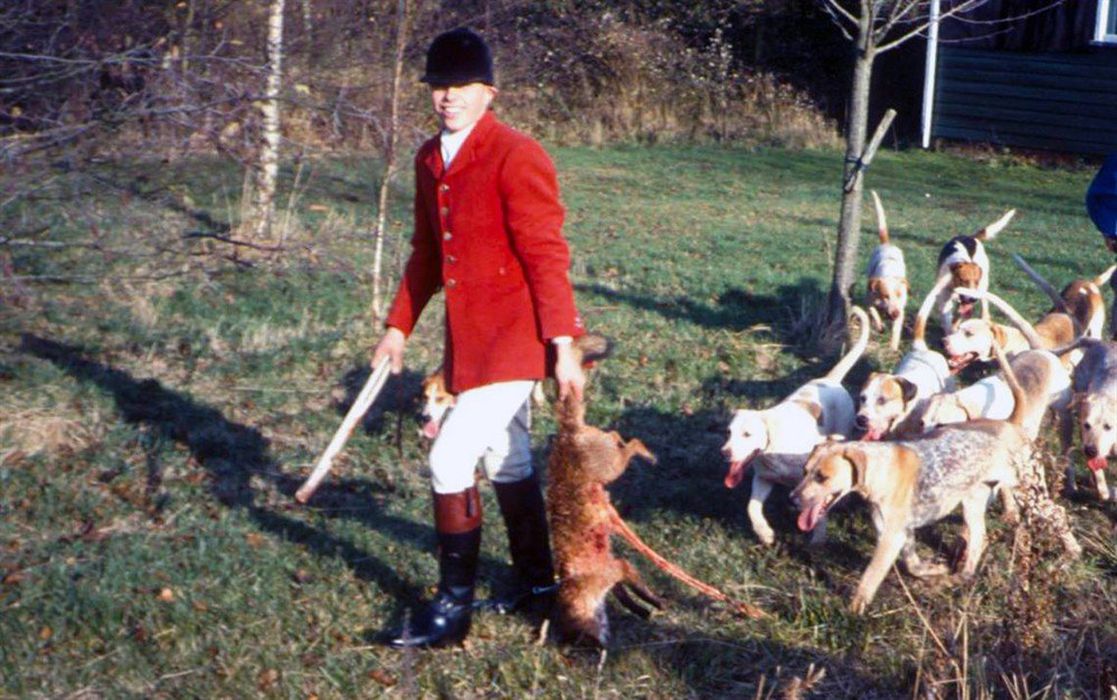 Why is fox hunting bad?

Scientific evidence shows that the animals targeted in fox hunting suffer physical and mental stress when chased by a hunt, whether or not they are eventually killed.

The Burns Report produced in the year 2000 stated that: “There is a lack of firm scientific evidence about the effect on the welfare of a fox of being closely pursued, caught and killed above ground by hounds. We are satisfied, nevertheless, that this experience seriously compromises the welfare of the fox.” That is one of the reasons hunting with dogs for sport was banned in Britain more than 15 years ago.

Foxes naturally escape predators by going underground, but hunts employ staff to block up these escape routes the morning before a hunt meet, forcing an unnaturally long chase. If someone is found guilty of blocking a badger sett, it is often done for this reason.

If a fox does succeed in escaping underground, hunt followers send terriers down the hole to trap the fox while they dig it out and then shoot it. Again, the Burns Report concluded that the inability to escape dogs underground causes the fox ‘extreme fear’ and is a ‘serious compromise of its welfare’.

Autopsies reveal hunted foxes are not killed quickly, but endure numerous bites and tears to their flanks and hindquarters - causing enormous suffering before death. Foxes forced to face terriers underground can suffer injuries to the face, head and neck, as can the terriers.

No other native British mammal divides opinion as deeply as the red fox. We believe the evidence does not support the criticism of this iconic British species. While foxes are of course predators – they kill other animals for food – their impact on livestock is exaggerated, and can be reduced with good farming practices.

The threat of the ‘fox in the chicken coop’ can be remedied with a secure electric fence. While sheep farmers may curse foxes for the loss of their lambs, in reality studies have shown that poor farming practices, disease and bad weather are far more likely to lead to lamb deaths. A 2000 study in Scotland found that around just 1% of lamb losses could be directly attributed to foxes.

On the other hand, by feeding on rabbits, a 2003 study estimated that rural foxes save British crop farmers around £7m per year.

The other victims of hunting

The animal being hunted is the ultimate victim of hunting with hounds, but there are others.

Hunts regularly breed more puppies than are required for the hunting pack. Only the most promising are selected, often through the tradition of cub hunting, during which the riders surround an area containing fox cubs and send the hounds in to learn how to kill them. We also have recent evidence of fox cubs being thrown to the hounds at a hunt kennels, to teach the dogs that they should kill these animals.

Fox hunting also relies on terriers to chase foxes underground. This so-called terrier work leads to painful injuries to both the dogs and the foxes.

Badgers are Victims of Hunting too

During the hunting season individuals, often terrier men will be out early in the morning prior to a hunt meet, blocking up badger setts. This is to stop the quarry, usually a fox from escaping down the hole and ruining the chase.  If a fox does escape into a badger sett during the hunt, then often digging out will take place.  Digging out is where members of the hunt, usually terrier men, dig out the fox so the chase to continue. Not only is this cruel but it is also illegal as badger setts are protected by law.

If you are out in the countryside and witness anybody attempting to block a badger sett please dial 999 if the crime is in progress.  On discovering a blocked badger sett call 101 and report to the Badger Trust.

You can also report any suspected crime to our Animal Crimewatch. This is a confidential supporter funded hotline where you can report cruelty to animals in the name of ‘sport’ by telephone, email or using the online form.

The League Against Cruel Sports is proud to be a part of the Badger Persecution Priority Group.

Hunts can cause havoc in the countryside when the pack of hounds picks up the scent of a fox. It is common for the hunting dogs to maraud through farms, disturb and kill livestock or pets, and often be seen crossing major roads and railway lines – all of which helps to prove that the pack is not following a pre-laid ‘trail’, which the hunts claim they are doing. Anyone suffering from hunt havoc can contact our Animal Crimewatch team.

Hunting wild mammals with dogs for sport was banned in Scotland in 2002 and England and Wales in 2004. These are fantastic achievements! However, the battle to stamp out hunting in the UK is not yet won as these bans have not been properly enforced, the attempts to eliminate or weaken them continue, and hunting is still legal in Northern Ireland.

There were two attempts by the Government to weaken the Hunting Act, most recently in July 2015. The League was at the forefront of the campaign to ensure that this attempt to bring back hunting by the back door did not succeed.

In September 2016 we teamed up with respected explorer Sir Ranulph Fiennes to educate MPs attending the Conservative Party conference about the realities of hunting, resulting in Environment Secretary Andrea Leadsom to drop mention of repeal from her speech.

As a key player in the hard-fought battle to get hunting with dogs banned in the first place, the League Against Cruel Sports is working hard to ensure the Hunting Act 2004 in England and Wales, and the Wild Mammals Protection (Scotland) Act 2002 in Scotland are properly enforced and strengthened to remove any exemptions. We are also working to achieve a ban on hunting with dogs in Northern Ireland, which remains the only jurisdiction in the UK where it is still legal.

After 95 years of campaigning to both bring about and enforce a hunting ban with hounds for sport, we remain ever-vigilant in defence of the ban and will tirelessly campaign to both secure and strengthen it.

How can I help stop fox hunting?

Contact your MP and ask them to urge their party to keep and strengthen the fox hunting ban.

Join one of our supporter groups to help us raise awareness that fox hunting still takes place.

Up and down the country landowners and managers are allowing ‘trail’ hunting to take place. Contact them today and demand they stop being complicit in fox hunting, by banning trail hunting and all other hunting related activities.