Traditional hunting involving the chasing and killing of animals, was banned by the Hunting Act 2004 in England and Wales, and the  Protection of Wild Mammals Act 2002 in Scotland.

After the ban, ‘trail’ hunting was created.

What is ‘trail’ hunting? 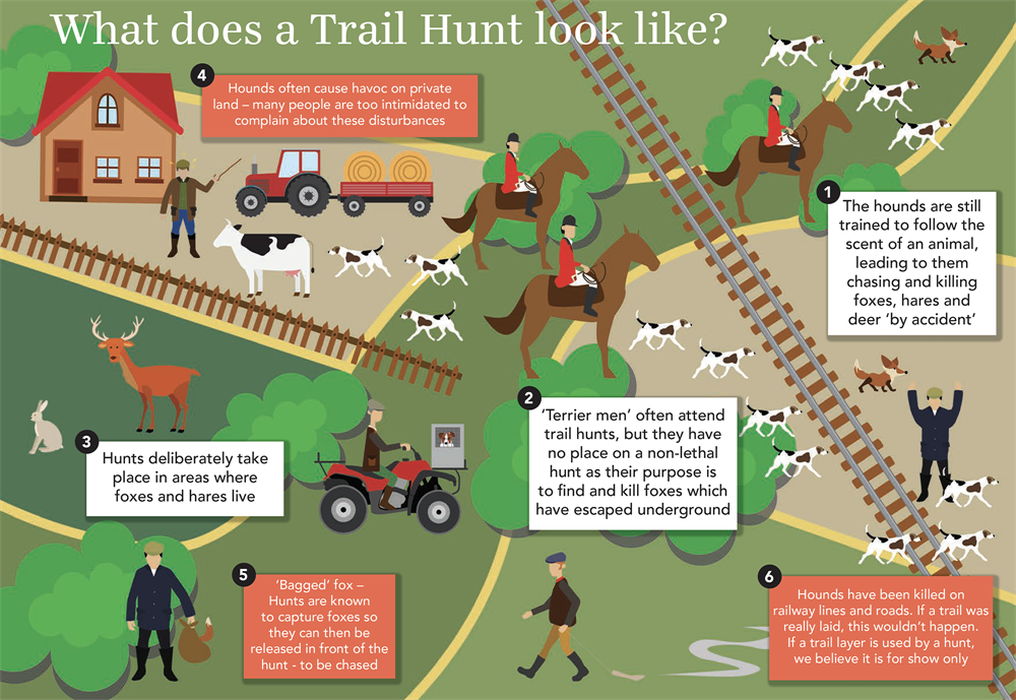 What is drag hunting?

'Trail’ hunting is a “smokescreen”…

An explosive exposé aired on ITV in November 2020 showed senior figures within the Master of Fox Hounds Association and the Countryside Alliance caught on camera admitting that ‘trail’ hunting is a “smokescreen” for the chasing and killing of foxes.

Phil Davies, the Countryside Alliance police liaison officer, said:
“Now you know more about hunting than the saboteurs or courts will know but what it will do is create that smokescreen or that element of doubt that we haven’t deliberately hunted a fox, so if nothing else you need to record that and it will help us provide a defence to huntsman.”

Mark Hankinson, MFHA director, said:
“It’s a lot easier to create a smokescreen if you’ve got more than one trail layer operating, and that is what it’s all about, trying to portray to the people watching that you’re going about your legitimate business.”

If 'trail' hunting is real, then why are hunts out of control on roads and railways, trespassing on private land, and worrying domestic pets and livestock as well as still killing wildlife? Find out more below:

Claim of trail hunting was a cynical subterfuge"

The case against ‘trail’ hunting

The League Against Cruel Sports believe ‘trail’ hunting is not a genuine sport but a cover for illegal hunting, designed to deceive the authorities and make the prosecution of illegal hunters very difficult.

Now the hunting fraternity themselves have admitted to using trail hunting as an excuse to circumvent the law, it is only a matter of time before trail hunting comes to an end.

Read our trail hunting leaflet and see what a 'trail' hunt looks like.