This week I was proud to join my friends and colleagues from across the sector for a historic moment: Westminster’s first debate on banning greyhound racing in Great Britain. Never before has this issue been debated in Great British halls of power, and I was happy to represent the League and to play my part in this landmark event.

It shows just what can be achieved when we all pull together. Alliance Against Greyhound Racing deserves the credit for the debate even happening. The alliance is made up anti-racing campaigners such as Greyt Exploitations, Anti Racing Kent, Stop Owlerton Racing, Greyhound Awareness Cork, Greyhounds: Many nations, one voice, and the League - all united behind the banner of banning greyhound racing. It was the Alliance which launched the petition to secure the debate. 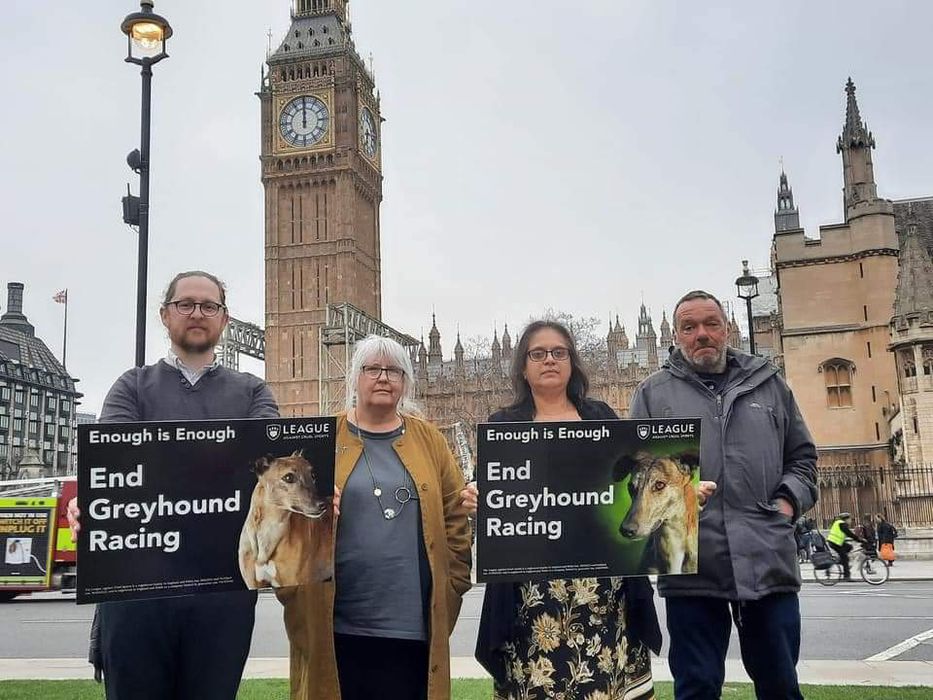 It was clear from the debate that all those who are both pro and anti-racing acknowledge there are severe animal welfare issues with greyhound racing. Thousands of dogs injured a year and hundreds of deaths (these are just the ones officially reported), euthanised for both ‘welfare’ and economic reasons. There’s also an almost complete lack of transparency in how deaths and injuries are reported away from the tracks, kennelling issues, officially retired dogs going on to race at unlicensed tracks, physical health issues and the mental scars.

So how did the debate go? Unfortunately, there was a bias towards greyhound racing being allowed to continue as it is.

Vice-president of the Greyhound Trust and MP for Romford, Andrew Rosindell (Conservative), said: “All of us present are animal lovers and care for the welfare of greyhounds and all animals that we have a duty of care towards.”

This is very true, but he did seem to think that a lower injury rate – still in the thousands per year - was “heading in the right direction”. Surely the only acceptable rate of injury in greyhound racing is 0?

Sadly, this view was reflected by other contributors. Despite hundreds of dogs dying every year, Ian Lavery (Labour), MP for Wansback, spoke at great length on the subject, saying that “Greyhounds will get injuries” as if this is something that should just be accepted. Mind you he did also say that greyhounds were “looked after better than [his] own kids”. Perhaps he needs a tour of the the former racing kennels I have been to, and see if he still thinks that..

But there were voices that stood up for greyhound welfare. MP for Falkirk John McNally (SNP) raised an interesting point regarding the discrepancy between tracks licensed by the Greyhound Board of Great Britain (GBGB) and those that have no regulation at all. He closed his speech with the very moving story of Morag the rescued greyhound, who still bares the scars of her racing past.

A huge thank you to Christina Rees (Labour/ co-op), MP for Neath, who led the debate. She spoke clearly not only for the need to ban greyhound racing, but also of its economic decline. She said: “In the UK, there were once 77 GBGB-licensed tracks and 200 independent tracks. Today, 20 licensed and three unlicensed tracks remain. Greyhound racing to satisfy the needs of, and create profits for, the betting industry is being recognised as an animal welfare and gambling addiction problem.”

But despite the dispiriting speeches made by some, never before has a debate on banning greyhound been held in Westminster. This is a milestone that will are determined to use as the beginning of the end for the cruelty of this industry. We will regroup, take what has been said in this debate and move the campaign forward.

In the meantime, please visit the Alliance Against Greyhound Racing website to find out more about the campaign and how you can help, and follow them on social media.