Mark Hankinson, former director of the Masters of Foxhounds Association, has appealed his conviction for encouraging others to use trail hunting as a cover for illegal foxhunting. But how did he come to be convicted?

It was last Autumn that one or two of us at the League were told about the existence of recordings of three training webinars organised by the Hunting Office.

We were told that two of those webinars, obtained by an organisation called Stop The Cull, would finally blow the lid off the Countryside Alliance’s turgid mantra that ‘trail’ hunting is a legal activity.

The League did not record the webinars, but we were given copies in strict confidence and were unable to tell people about them until legal issues had been overcome and then they would be released to select media.

The next week or so felt agonising. There was an issue of defamation and copyright. Frantically, and despite a volley of legal threats, we tried as many ways as possible to get them into the public domain without undermining their credibility, all the way up to Westminster.

And then, late one Friday night, they were released by the Hunt Saboteurs Association (HSA).

But the legal issues hadn’t gone away. So, while they were shared on social media, neither we nor the regular media could release them. We knew our supporters would see them and wonder why we kept silent.

But we had a plan: the League made the official complaint to police, which prompted an investigation to be launched by Devon and Cornwall Police. The webinars could finally be reported.

Thanks to you we redoubled our efforts to urge landowners across the country to suspend access to the hunts: within a week more than 200,000 emails were sent by you to landowners, and our celebrity friends also took up the campaign. Other anti-hunting organisations were running similar actions on social media. As a result, more than 2.3million acres of previously hunted land in England and Wales was denied to hunts.

sent to landowners urging them to deny access to the hunts

lobbied the government to properly redefine its stance on animal welfare

In February 2021 we finally heard that Mark Hankinson, one of the six people who spoke on the webinars, had been charged with intentionally encouraging or assisting others to commit an offence under the Hunting Act 2004, contrary to Section 44 of the Serious Crimes Act 2007.

In the intervening six months we went back on the road with our National Trust campaign, welcoming many of our supporter groups and volunteers at our events asking people to urge the National Trust to make its ‘pause’ of hunt licences into a permanent ban.

Your actions targeted hunting enablers, like online auction site Jumblebee, and together we helped councils bring motions to ban access to hunts on their land; many succeeded, some did not, and they are continuing to this day.

We also got on with other campaigns in Northern Ireland, Wales and Scotland while we waited impatiently for September. We also joined a coalition of 50 charities lobbying the government to properly redefine its stance on animal welfare.

Our work behind the scenes in Westminster saw the webinars brought up in parliament and taken to the highest levels of government – and we wrote about it in parliament’s official publication.

Our planning for the court case began weeks ahead of time. We did pre-recorded interviews, we crafted our branding, we planned our ‘smoke screen’ stunt for outside the court on the first day, and we took the message to the heart of hunting: to addresses relating to the three key people on the webinars; Mark Hankinson, retired chief inspector Phil Davies, and of course House of Lords incumbent Lord Benjamin Mancroft.

It is hard to describe in words the magnitude of what would happen if the verdict was guilty. Most of us dared not dream: we hoped for the best, but we very much planned for the worst.

Hankinson said he talked about using trail hunting as a smokescreen to confuse the sabs, who he said would stoop as low as hurting both horse and hound in their efforts to stop the hunt.

It became evident on the first day that the trial, initially scheduled for two days, would last into a third, and then the judge would likely retire to consider his verdict.

No-one could do anything more. It was in the hands of Wolverhampton Polytechnic alumni Judge Tan Ikram, deputy chief magistrate of England and Wales, to decide whether that threshold had been met. We returned to 181 Marylebone Road on 15 October, ready for whatever the judge might say.

Back were the banners, the T-shirts, placards, supporters and volunteers. Back too was our ‘huntsman’, ready to turn up in shackles should the verdict go our way.

And into court we went. Or at least, those who could find a seat.

As the judge began reading, those of us watching began to raise our hopes. There was a lot of quoting directly from the webinars.

And then from the judge came blow after blow after blow to the defendant, to Tim Bonner sitting in the gallery, to his organisation the Countryside Alliance and to the Hunting Office. Until finally…

In my judgment, he was clearly encouraging the mirage of trail laying to act as cover for old fashioned illegal hunting. Whilst he didn’t use overt words, he implied it again and again." 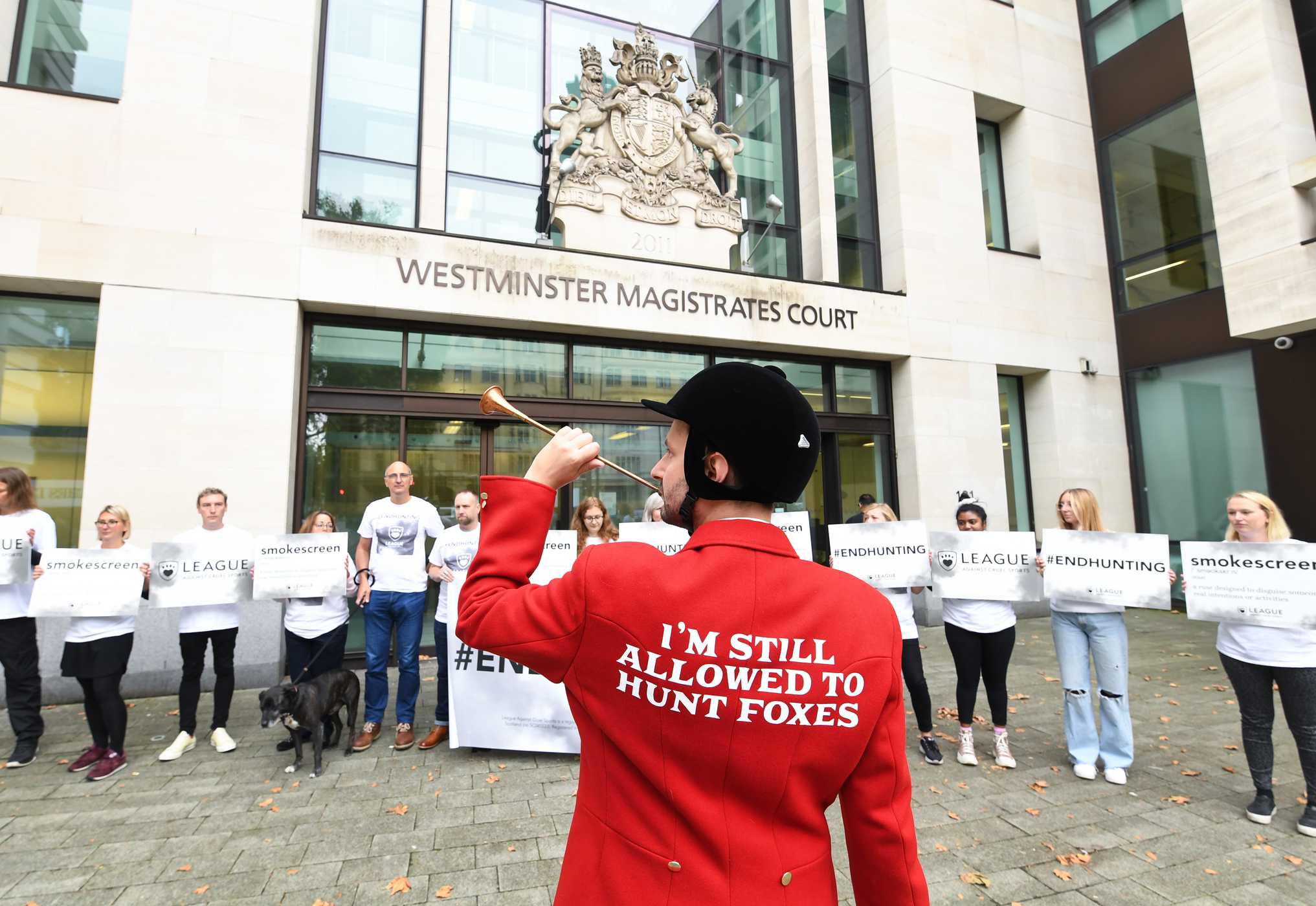 More than 100 people were taught how to carry on killing foxes without being prosecuted or to use trail hunting to create the element of doubt that meant a court would have no choice but to dismiss the case.

And we only know about this because the pandemic forced the hunts online: Zoom caught them out. We can only speculate how often this “advice” is given out to hunts up and down the land.

But enough is enough.

The £3,500 fine Hankinson had to pay – and is now appealing - is paltry but beside the point.

The cost to the hunts must be that they can surely never, ever use the defence of trail hunting in court again.

The cost to the hunts must be a new, robust, Hunting Act being passed through parliament.

And, with the continued support and determination of you, our supporters - not to mention all the anti-hunt organisations involved in obtaining and distributing the webinars - behind it should be a bright future for persecuted wildlife.