Two prominent figures in racing return to the ‘sport’ after both receiving bans for posing for pictures astride dead horses.

Each year the League joins the Gloucester Outreach Advocacy Team to protest against the cruelty inflicted on horses at the Cheltenham Festival. Gordon Tye, GOAT co-founder, wrote last year about why he campaigns against horse racing. His words are below.

Gloucestershire Outreach Advocacy Team is a Grassroots collective with an abolitionist stance on all animal use and exploitation. We campaign against animal exploitation in many forms…  as consumables, wearables, experimentation tools and of course as entertainment. We have been actively raising awareness of, and campaigning against Cheltenham horse racing for a number of years.

The racing of horses and the horse racing industry is inherently cruel and abusive, where its participants are frequently killed on track! The occasional death of a racehorse is publicised but few know the reality that around 200 horses are killed on racetracks in the UK each and every year. This however is the tip of the iceberg to what is believed to be several thousand horses that die and are killed during training or sent to slaughter as they simply do not ‘make the grade’ to be a professional racehorse.

The image of Grand National winning trainer Gordon Elliott, sitting astride a collapsed, dead horse and the one of Rob James a jockey who won at the Cheltenham 'Races' in 2020 doing the exact same shocked the nation but these are not unfortunate one-off moments as they would have you believe. They are actually a glimpse into an industry whose flagrant disregard for life and lack of respect are clearly evident.

The whole nature of the so called ’sport of kings’ is wrong in so many ways. Horses are not designed to be used as transport! From a very young age they are ‘broken in’ and as the word suggests this ‘breaking in’ is a process of breaking the will of the horse to reject the rider and force them to do what the trainer wants them to do. Racehorses are competitively raced at a young age, typically between three to four years old. At that age they are not even near being fully grown. Horses have cartilage at the ends of their bones and as they develop the cartilage fuses between the bones. It takes six years before the cartilage in a horse has finished fusing and they are considered fully grown. The last bones to fuse on a horse are the vertebrae in its neck and back!

Horses used by the racing industry are known as thoroughbred. Bred from a pure lineage to perform with maximum exertion which has led to inherent health problems including high incident rates of bone fractures and exercise induced pulmonary haemorrhaging. Racehorses are forced to run to the maximum of their ability, not only while competing - often using a whip but also while being trained. They are forced to jump unimaginably high and difficult jumps, putting huge pressure landing on their long and narrow front legs, often suffering falls and fatal injuries.

The politicians could step in and ban horse racing completely but this is highly unlikely as even while the country was in the grip of the covid-19 pandemic Culture Secretary Oliver Dowden gave the go-ahead for Cheltenham Festival to continue, creating a ‘super spreader’ event. Since then, the government has handed the racing industry a whopping £40m bailout.

The public needs to be fully informed on what they are contributing to every time they attend a race meet or place a bet. There is no such thing as a harmless flutter!

This cruel exploitive industry relies on the betting industry to survive... we have the power to put an end to this outdated and barbaric ‘sport’.

We’ll also be at Cheltenham Racecourse on Friday, 18 March – Gold Cup day – to protest. Please join us if you can. 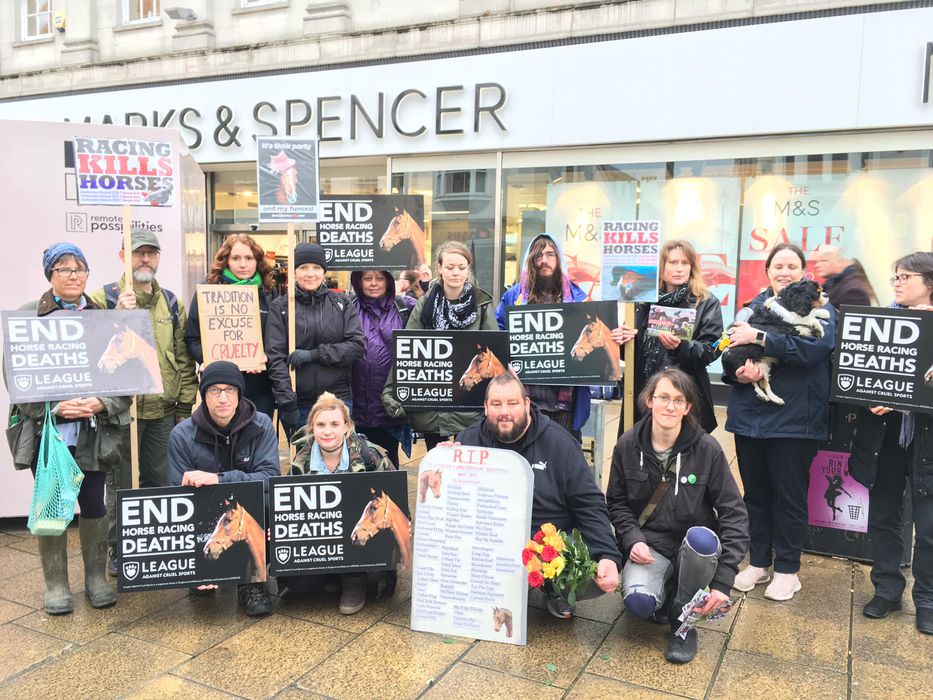