Campaigners call for an end to hunting on Somerset Council land

Animal welfare campaigners handed in letters to councillors and the four main party leaders at County Hall in Taunton today calling for fox and deer hunting to be banned on Somerset Council land.

Staff and supporters from leading national animal welfare charity the League Against Cruel Sports and local campaign group Action Against Foxhunting, also spoke to shoppers on Taunton High Street about the campaign.

A fox and deer hunting ban outlawed hunting with dogs in England and Wales in 2005 but, in the last four years alone, the League has received reports of nearly 300 incidents in Somerset – marking it out as a hunting hotspot.

Taunton residents were also invited to sign a petition,which calls for an end to ‘trail’ hunting, exempt hunting, hound exercise and hunt meets on public land in Somerset.

Nick Weston, head of campaigns at the League Against Cruel Sports, said: “Enough is enough. Fox hunting and deer hunting is still widespread across Somerset despite the ban on hunting with dogs and the public’s anguish at the chasing and killing of animals.

“Somerset Council now has the chance to set an example to the rest of south west England and make a landmark decision to ban hunts from its land.”

Pip Donovan, founder of Action Against Foxhunting, said “We’re currently doing a survey with rural residents and the overwhelming majority of people in the countryside oppose fox hunting and are aware that foxes are still being killed.

“Council land is our land and we don’t want the hunts taking their hounds onto it to pursue their barbaric activities.”

Somerset is also one of only two counties which see deer being hunted by three stag hound packs.

The brutal world of hunting with dogs was rocked by a court case late last year in which senior huntsman Mark Hankinson was convicted of intentionally encouraging or assisting others to commit an offence under the Hunting Act 2004 by telling them how to use the “smokescreen” of trail hunting to get away with hunting real animals.

The judge in the case dismissed trail hunting, the excuse often used by hunts, as a “cover for old fashioned illegal hunting” and a “sham” and a “fiction”.

Elsewhere in England, three other councils – Cheshire West and Chester Council, Peterborough City Council and Nottinghamshire County Council – have voted to ban hunts from their land in recent years.

Photo one: Nick Weston, head of campaigns at the League Against Cruel Sports (centre) and Pip Donovan, founder of Action Against Foxhunting (right), and the ‘League fox’ outside County Hall handing in letters to Cllr Tessa Munt, Lead Executive Member for Children and Families (far left) and Cllr Sarah Dyke, Lead Executive Member for Environment and Climate Change (second left).

Photo two: Nick Weston, head of campaigns at the League Against Cruel Sports (right) and Pip Donovan, founder of Action Against Foxhunting (left) , and the ‘League fox’ on Taunton High Street.

Polling from 2017 by Ipsos Mori shows that 85 per cent of people are opposed to hunting with dogs, including 81 per cent of rural residents.

Polling from 2018 by Survation shows that just one in six people living in rural areas feel that hunting reflects countryside values.

Full details and tables of the Survation polling available here: 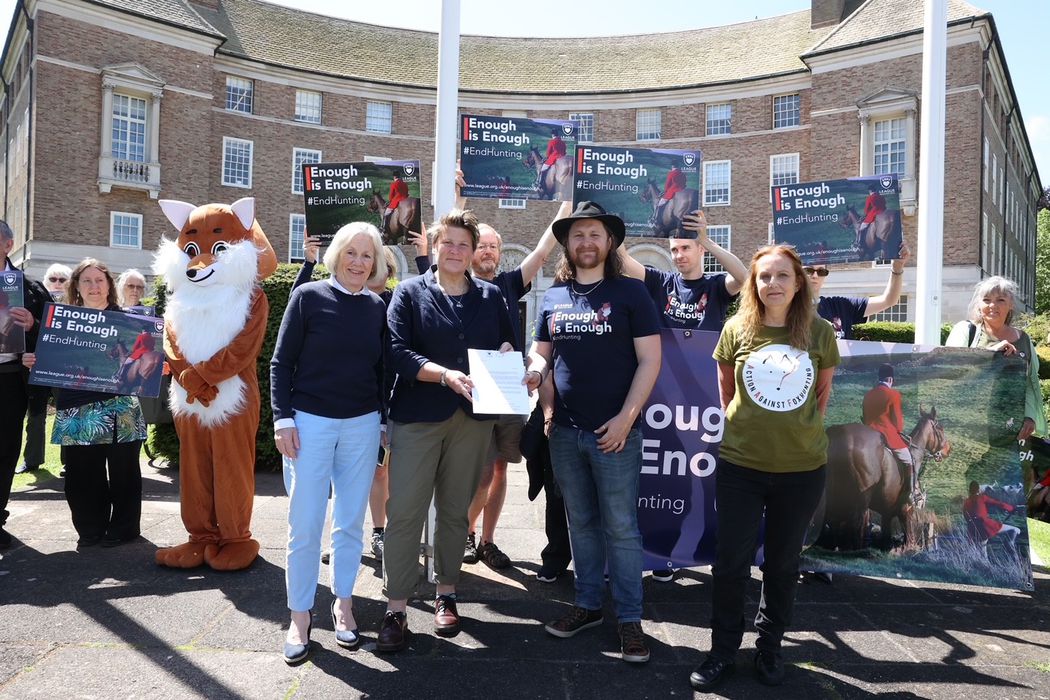