Leading animal welfare charity the League Against Cruel Sports is renewing calls for stricter safety measures within the horse racing industry ahead of this week’s Aintree Grand National Festival.

The calls also come after four horses died in just four days during this year’s Cheltenham Festival in March.

Since 2000, at Aintree alone, 55 horses have died which include 13 during the Grand National itself. Across Britain in 2021 there were 200 horse fatalities.

Chris Luffingham, director of external affairs at the League, said: “Enough is enough. Animal welfare should be at the heart of horse racing and much tighter safety measures need to be implemented – the first step is to create a new independent regulatory body which focuses purely on the welfare of the horses.

“The use of the whip in the sport should be banned as it is forcing horses to go beyond what they are able to cope with and results in stress, injuries and deaths.”

The League is highlighting the numbers of horse fatalities with an advertising campaign outside Aintree Racecourse. It uses figures from the British Horseracing Authority.

Chris added: “The lives of horses are being sacrificed for ‘entertainment’ and gambling.”

The four horses destroyed as a result of racing during the Cheltenham Festival were Shallwehaveonemore, Mindsmadeup, Born Patriot, and Ginto.

Pictured: The League’s adverts outside Aintree Racecourse this week.

See below a link to a video highlighting the deaths of horses in the racing industry: 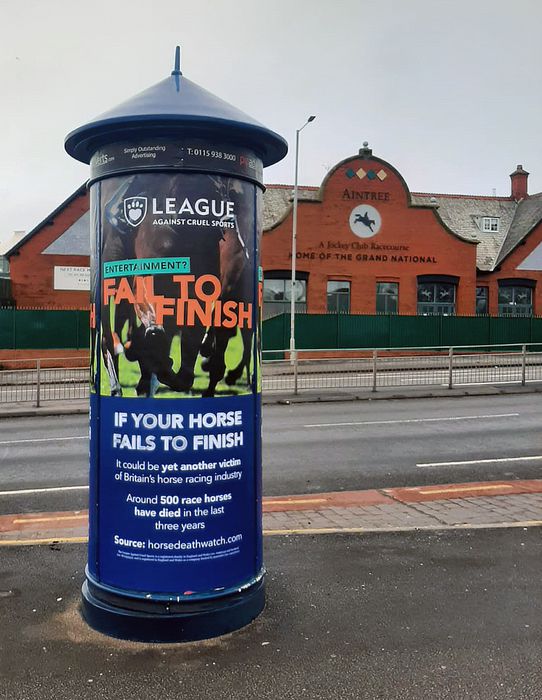 The League’s adverts outside Aintree Racecourse this week.